Goolsby: Animal lovers will appreciate the randomness of this movie. From the dog named Dug, to the female bird named Kevin. Like most Pixar movies, adult innuendos go over the little heads, but those were far and few between. This movie was just clean good fun.

Phipps: Mostly all ages, although, for the really young kids, 4-6 years, it may be a little complicated. They will love all the visuals – the big, colorful bird and “flying” house. You’ll appreciate the jokes and the “squirrel!” of real life.

Storyline: Mixed but clear
An old man remembers what it means to live.

Phipps: Like I said before, Pixar’s Up is a little more complex than usual. It’s entirely clear, and I have to say…I couldn’t wait until the house floated into the air, but I also appreciated seeing the accelerated love story between Ellie and Carl. This movie is actually really pro-marriage and pro-commitment. You literally see Carl and Ellie walk through life together, and you see Carl’s dogged pursuit of to see a promise kept.

Goolsby: I’ve heard that some people were confused by the previews. I was not confused. The storyline has two main sections, the first half when Ellie (Carl’s wife) is still alive, and the second half when she is gone. You see a beautiful love, and then you see how lost someone can be without that love. Carl takes one last journey to see the world, and meets some crazy characters along the way.

Phipps: Honestly, Up is one of the funniest movies I’ve seen in a long time. Just good, clean jokes. And it’s not the same thing, over and over, but a variety—whatever your humor, you’ll find something to laugh with. I have to say, the short film shown beforehand, “Partly Cloudy,” is the best Pixar short. I laughed so hard, I cried.

Goolsby: There are amazing one-liners that I’ve thrown down since. The most notable was featured in the previews, but still kept all of its charm on the big screen. Squirrel! Russell, the tubby Boy Scout who gets taken on the journey, is perfect. He compliments the guarded Carl very well.

Goolsby: Since a good chunk of this movie takes place in the sky, we get a wonderfully bright background. We did see this movie in 3-D and the special effects were done well. Nothing too dramatic, but it added a subtle layer to the film.

Phipps: Up was visually exciting. It had the look of the Pixar movies, and as Goolsby said, the best word to describe it is “bright.” The “past” with Ellie was subdued for contrast, and of course, I can’t help but think of the old adages “bright future” and “living in the present.” It was nice to visually translate that to screen.

Phipps overall: 5
I really liked this movie. Up is in the same neighborhood of classic-ness as Finding Nemo, but Nemo still earns the biggest house on the street. Time will tell if Up’s jokes will become standard to pop culture as Nemo’s are. Will “Squirrel!” become the new “Mine!”?

Goolsby overall: 4.5
Make sure you catch the short before the movie. I said right after walking out of Up that it was as good as Finding Nemo, but I think now I rescind that. Still good though. 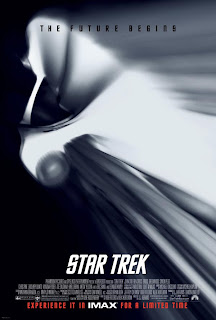 Phipps: I think your kids will like it. It’s not Bolt. It does get a little scary and loud. I would venture to say around 9 or 10 age group would be fine. If you have a mature little tike, who watches action all the time…I wouldn’t hesitate to take them along.

Goolsby: Some of the clothing on the girls showed a little skin – but that was to be expected. There was one scene in which a green girl gets down with Kirk in her skivvies. Star Trek is about sex though, its about action, and as Phipps states it would be okay for a older youngin. Loud noises, love it!

Storyline: Where no one has gone before…

Phipps: I felt that Abrams did a phenomenal job of resurrecting the franchise. I thought it was fresh and fun and accessible, without sacrificing all the things we love about Star Trek. I actually can’t wait to see what they come up with for the next movie!

Goolsby: When space time travel is involved, I always end up explaining it with a lot of hand gestures that usually incorporate my feet. The storyline was a good mix. We got to see the childhood perspective which I thought was very well done. They have given themselves a clean slate for an innumerable amount of possibilities. Loved it.

Phipps: There is one moment where someone is sucked out of the Enterprise screaming, and once she is out into space, there is no sound. And that is an accurate rendering of action in space. There is no noise. I appreciated that, being a space geek and all. I felt that all the action was necessary to the storyline and made sense. I was very pleased with it.

Goolsby: The action was loud, and it was very very well done. Of course Abrams wants to get our attention, and he got it, held it, and sucked it dry leaving us wanting more. And who’s that red coat, oh wait, doesn’t matter! Love it. They stayed true in more than one way. Even the fighting styles stayed true to the original characters – specifically Sulu.

Phipps: I was amazed by the cast. They channeled the original actors in mannerisms and stayed true to the characters, while also bringing a new spin on it. This resulted in non-stiff, interesting characters. I could go on and on about it, but honestly, I thought everyone was great. Zachary Quinto blew us to smithereens as Spock (accompanied by Leonard Nimoy, of course). Chris Pine was inventive and decidedly James T. Kirk.

Goolsby: Point on all the way. Phipps said it all. Quinto owns a special part of my heart. Swoon, sigh, swoon. Delivery was amazing. Oh gosh, just got a flash back of Pine sitting in the chair eating that apple during the Kobayashi Maru. Classic, to the bone. Loved Bones too, Karl Urban did a fantastic job – “I can fix that!”

Phipps overall: 5
A must see, and then tell all your friends to go see it.

Goolsby overall: 5
Who needs to explain a 5? Of course it deserves a 5!

Contact us at goolphipp@gmail.com.
Posted by Goolsby / Phipps at 6:53 PM No comments: 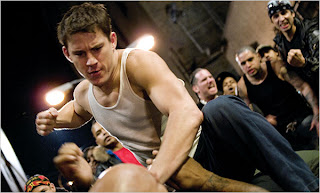 Goolsby: Actually there wasn’t too much language that stood out. But for sheer hand to hand violence, needs to be an older audience. There was some sexual content as well as scantly clad women and men.

Storyline: Rock’em, Sock’em, Bop’em
Finding a new way to make ends meet using what you got – your fists.

Phipps: Don’t try to make it more complicated than it is. It’s 3 parts action movie, 1 part heart. Thanks to Tatum Channing, girls won’t mind watching it.

Goolsby: Set in New York, I think it accurately portrays the city in the context of this movie. We don’t see the frills, we see the grit. Simple storyline with just the right hint of a romance to keep it from being completely fist-to-fist content. Oh, and the grandma! She was awesome. Wholesome mix of action, family, love, and drama.

Action: Ouu, did you hear that hit?
Clean fight sequences with good shots, sounds, and lighting.

Phipps: I’ve got nothing to complain about here. The action was straight up awesome: believable, loud, and showed where it hurts.

Goolsby: I like a good fight sequence that is real. It was all believable and felt real, mostly thanks to the sounds I think. When you can hear each blow, you know it’s good. Reminded me a lot of Green Street Hooligans in the way they filmed the fight sequence – fast, a tad-spotty, and crisp. I liked it.

Goolsby: I would finish that by saying, unexpectedly good. I didn’t go in expecting much, and was surprised to see a wide range of various multi-layered characters. We’ve seen what Tatum can do with the conflicted character in Stop-Loss, and in Fighting he brings an even new dimension to the table. That kid can sure convey a lot with his eyes. Terrence Howard as Harvey the fight manager, delivers this deep-rooted emotionally vast character. Albeit I’m not exactly sure the whole story on the Harvey character, but I got the general gist and it brought an element that made me really feel for his character. Kudos to you Howard for giving us such a complex and intriguing character.

Phipps: The only complaint I have is Terrence Howard. I couldn’t figure out if he was supposed to be slow because of a life of fighting, or if he was just slow. I spend half the movie wondering that. I also think it is more of a script issue, than acting ability. The rest of the cast did a great job.

Goolsby overall: 3.75
I don’t expect people that aren’t prepared for what they’ll be getting to come to this movie. It brings a specific group of people, and that randomly includes Phipps and I. Overall I think it stayed true to what it was, and gave even more than I expected. I’m happy to have more good fight movies in my frame of reference – so thanks Fighting.

Posted by Goolsby / Phipps at 6:42 PM No comments: