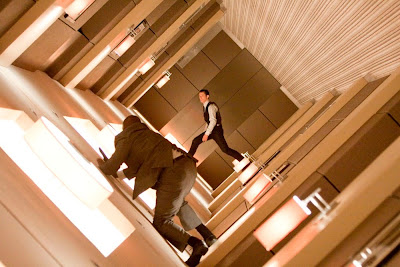 Goolphipp Award: 5 (Opening Night Excellence)
Goolsby:
You must, must, after reading this, go get in your car and see this film. This movie was a trip and a half. Everything about it was amazing and top-notch. This movie makes you think, and I so very badly want to discuss the plot with more people! Don't worry, Goolphipp won't be spilling any beans, read on without worry. Here's the concept - dreams hold people's secrets, memories, and ideas. When people enter your dreams they can steal information, plant ideas, and experience your whole world.
Let's talk acting. All performances were great. DiCaprio delivered and there is a scene at the end between him and Marion Cotillard that sort of took my breath away. The kid sure does know how to use his eyes. I was also really pleased and excited for Joseph Gordon-Levitt. He is making such wise decisions with his career, and on top of it, hes getting to work with so many stellar actors. The action was... impeccable. Since this is a dream world you can bet there were some complicated special effects going on. I loved how the dream worlds were created. There is a anti-gravity sequence you might have seen in trailers, it is one of the coolest things I've seen on screen in a long time. This movie keeps details in mind, and even hold true when you see someone bleeding in anti-gravity.
Now the plot leaves me a bit confused, but I'm okay with that. Surprisingly, it wasn't as hard to follow as I thought it would be. Phipps and I were looking for some bigger switch at end, but once you get the concept, it's easy to swallow. The concept of this movie is so refreshing. We saw a late showing, and when I went to bed that night, I guess my brain hadn't had enough time to digest. I had an Inception-inspired dream! Talk about a movie that makes an impact. Point blank, awesome concept, great acting, superb special effects, add a dash of well-placed humor, and ta-da, success!
Goolsby overall: 5
You've got your keys in your hand right? Go now.
Phipps:
Inception is easily one of the best movies this year. I haven't met a person that didn't like it. I think part of the draw is our fascination with dreams as a culture. We love the idea of dreams. Inception plays with this fascination. The action scenes were just stellar. There was a fight sequence in zero gravity - and it was done well. All the camera work and use of technology came together seamlessly. You think that this movie is going to be a little sci-fi from the tralier, but in reality, it feels really normal. This dream hacking thing is just part of the plot. The most important part of the movie is the character, Cobb, which I suspect is why DiCaprio signed on for it (not to mention working with Christopher Nolan). Everything revolves around him. It's quite an accomplishment to create a movie that is so character driven, while giving the illusion of being an action movie. Props to Nolan for that. DiCaprio delivered an amazing performance. I'm not a huge Leo fan, but he was impressive in this movie. The rest of the supporting cast was great too. It was nice to see a couple familiar faces from Gotham - Michael Cane and Cillian Murphy. Ellen Page was an interesting choice. I think it was a good transition/spread-your-wings type of movie for her, and while she wasn't involved in any of the down-and-dirty action sequences, it makes a nice resume line. Joseph Gordon-Levitt. I just like that kid. He's grown into a versatile actor - a result of carefully crafting his career. He's talented, and I can't wait to see what the next two years bring for him. All in all, it's a gooder.
Let me just say though...I figured this movie out...and I was about ten steps ahead of where it ended. I'm hoping for a sequel.
Phipps overall: 5
Fights in zero gravity.

Posted by Goolsby / Phipps at 1:33 PM No comments: 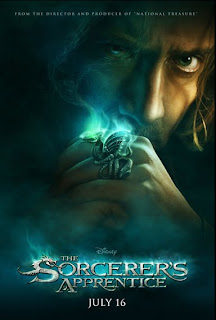 Phipps:
I saw this movie opening night with my mom. There were about 5 other people in the theater. It hasn't done an amazing job in the box office. However, I do want this to be a sleeper hit, because I want a sequel. It is such a fun family movie. The special effects were on par. The overall concept of this movie is interesting, and it was executed well. I didn't even mind Nicholas Cage. This is a good transition for him into the older-guy/dad sort of roles. I love Jay Baruchel, and he does well in the underdog role. The hands-down best moment of the movie was the nod(s) to Fantasia. I love when movies embrace their origins! I'll probably end up owning this movie, because it was a stellar time. I'm sure there were dozens of geek moments that I didn't catch the first time. And yes, there is a hilarious Star Wars line. A word to the wise, stay to the very end, there's an easter egg. So, take your fam to the movies and enjoy the ride.
Phipps overall: 4.25
History and magic - how can you go wrong?
Posted by Goolsby / Phipps at 4:00 PM No comments: 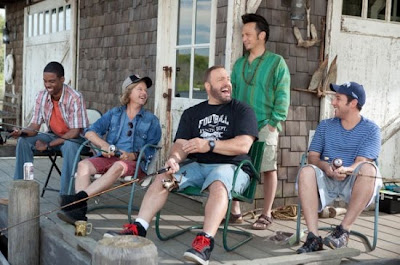 Goolsby:
I saw this one with a friend, not the Phipps. Me and my friend are both comedy lovers, and this movie pleased. We were laughing pretty much non-stop. Of course I had high expectations for this movie. Adam Sandler, Kevin James, Chris Rock, David Spade, and Rob Schneider. Throw in a random Steve Buscemi too. The humor was great, but now as try to recall this movie days later, it doesn't seem to have stuck with me. The thing that sticks out in my mind the most is the recurrent breast milk scenes. It was a little over the top. It was very different for me to see Maria Bello (who plays Kevin James wife, the breast milk producer) in this intense comedic role. I got to know her from The Jane Austen Book Club, which is a far more dramatic role. All in all this was a good film. Not a keeper for me, but a good time. And so not appropriate for young audiences. I would say high school and up at a minimum.