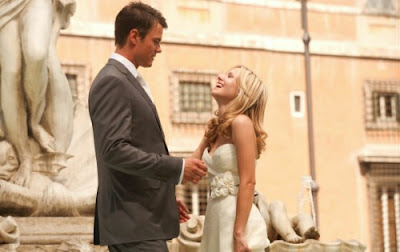 
Phipps:
Well, I did see the cheap matinee of this movie, and I wasn’t disappointed. It was a typical romantic comedy, but I had fun. I laughed, mostly at Josh Duhamel, who used this movie to show off his comedic timing. He was arguably the best part of the movie. His performance was solid. Props to Danny Devito, he’s a real pro. The rest of the cast was sufficient. I’ll probably end up buying this movie, if that makes a difference to you. It’s a prefect movie for a Girls Night. Guys will probably hate this movie (in all honesty). I will say that this movie made me want to go to Rome, and toss a coin into a famous fountain…and hope for the best.

Goolsby:
I saw this separately with my mother. I was disappointed. I didn't find the physical humor that great. The previews showed most of the funny moments, and the rest was hit or miss. My biggest complaint for this movie is that it was so slow. It took forever to start. With funny movies you have to hop right in and keep the punches rolling. This film did not do that. Phipps is right that Devito Stole the show. All in all it was a little slow paced and run-of-the-mill. Honestly, I think I saw my mom nod out a couple times. 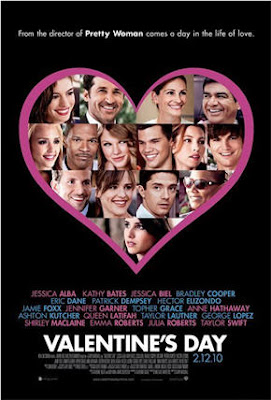 Phipps:
This movie was alright. I'm not a fan of vignette movies (not even Love Actually won me over), so if you like them, you will probably like this movie too. I have to say, I liked this movie better than Love Actually. I think this movie did a better job of connecting all the stories. Everybody and their brother (including both McDreamy and McSteamy!) was in this movie...all giving solid performances, except Taylor Swift. It was like the girl was on uppers. I did like where things landed at the end - spoiler alert! I have to say that I was pleasantly surprised that the 18-year-olds did not have sex...and that it was okay to wait (for a bit at least). In this society, I was quite shocked by that (although, I really appreciated it)! I think my favorite moment was the Moorpark Blvd. discussion, being that I live fifteen minutes away from Moorpark, California, and where everyone seems to get that Moorpark spelled backwards is "kraproom." It was a local joke and I laughed very loudly! And I did appreciate Taylor Lautner's falls and jumps in the movie - I'm always impressed by how talented the kid is. Overall, this is a fun watch. Don't overthink it.
Phipps overall: 3.25
A fun, fluffy movie.

Goolsby:
I'm a huge fan of Love Actually, so this movie was right up my alley. In these types of movies you always like some stories more than the others. I really like Julia Robert's story and Ashton Kutcher's too. This movies gives you a wide range of the walks of love, and I liked being able to see all of them.
Here is a complaint, in Love Actually the story of father-son duo, (Daniel) Liam Neeson and (Sam) Thomas Sangster is the basic little boy in love plot. The girl that the little boy goes after is Indian. In Valentine's Day, we've got the same plot down to the Indian girl! If Hollywood if trying to be "diverse" then why not make her some other race? Goodness. So I was a little upset to see some all too similar plot lines when compared to Love Actually. I guess when a good formula works, you use it.

I like this movie, not as much as other similar types though. Oh... I had heard some stuff before seeing the movie about Taylor Swift's poor acting chops. I'm afraid everyone is right. I know she was supposed to be playing a ditz, but if we look to Anna Kendrick, who plays a ditsy teenager in Twilight, the comparison is easy to read. You can play a ditz but still act- Anna Kendrick wins that race any day.

Goolsby overall: 3
Good laughs.
Contact us at goolphipp@gmail.com.
Posted by Goolsby / Phipps at 4:04 PM No comments:

Percy Jackson and the Olympians: The Lightning Thief 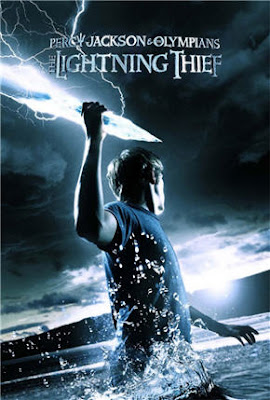 Phipps:
When Greek mythology invades the 21st century, you'll find me there. It's an interesting idea. I think the only real compliant is Percy doesn't completely fall apart after his mother disappears (and presumed dead). I'd be inconsolable for a while, and Percy doesn't freak out - he's oddly stoic about the entire thing. I suppose it could be argued that he was in shock combined with information overload, but even that doesn't fly well. I thought the performances were solid. Cinematography wasn't sensational, but also solid. Sometimes Pierce Brosnan's centaur effects looked awkward, but it wasn't enough to really complain about. I'm a fan of Sean Bean and I'm glad that he landed Zeus...I wouldn't want to be on that kid's bad side. This movie in general does a decent job of refreshing it's audience of Greek mythology - I'd feel stupid, and then the movie would explain it. Overall, I think it's worth seeing on the big screen. Give it a chance, and you'll have fun. I also have a sneaking suspicion that I will like it much better the second time around. 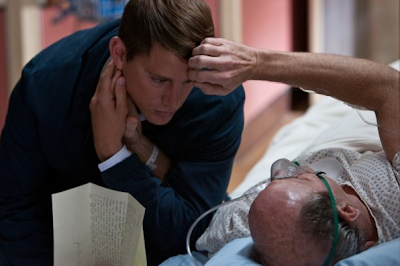 Goolphipp award: 3.8 (Worth 11 Bucks)
Goolsby:
We're suckers for a good love story. I really enjoyed this movie. I understand why they marketed this movie the way they did - with it following in the footsteps of the now classic Notebook, but I felt the real gem of this movie was not the main romance. The on screen bond between Channing Tatum and Richard Jenkins was really special to watch. Jenkins plays John's developmentally challenged father. It was never clarified if the father was autistic or suffered from Asperger's Syndrome, but either way, Jenkins did a stellar job. Whenever the two were on screen together they stole the whole shebang. Kudos for one of the best father-son performances I've ever seen. I would also say that their relationship was more profound and intense than the chemistry between Tatum and Amanda Seyfried. I must say, the father-son duo brought the most water works from me.
I have never read a Nicholas Sparks book, but I enjoyed the current plot setting of this story. John meets Savannah while on leave, and ends up enlisting for a further stay. We get to follow his journey through the 9/11 attack and onward. Unlike a period piece, I think this story hit home a bit harder for some people.
The soundtrack was also well placed and matched. It never felt too over powering or interfered with the movie.
Goolsby overall: 4.25
Bring the tissues.
Phipps:
I liked this movie. I definitely cried...and probably would have bawled like a baby if the group of ladies in front of us hadn't been talking up a storm. I think what I liked most about this movie is it didn't feel fake. I mean, the characters didn't do anything extraordinary...they weren't super special. Instead, they felt like ordinary folk living an ordinary life, which is in no way a dig. I like romances that are realistic (as well as sweet). I don't think this movie matches The Notebook, and I don't think it will be as widely embraced by men. So, it might be best to keep this a Girls Night Out movie...then you can let yourself get all splotchy from crying. As Goolsby said, the father-son aspect of this movie was amazing. It was difficult to watch, but you understood why things were the way they were. One more thing, Channing Tatum is a pretty decent crier, and that's important when you are trying to build your career. I would like to see him in a role that incorporated less action, even though he excels in projecting emotion through action. As a whole, Dear John didn't disappoint.
Phipps overall: 3.5
A snapshot of real life.
Contact us at goolphipp@gmail.com.
Posted by Goolsby / Phipps at 9:42 PM No comments: