Where we stand: Both fans, not fanatics

Goolsby: I love the series. I've read the book more than once, and appreciate its depressing qualities. We have a tradition for going to the midnight showings. We also have a tradition that borders on fanatic status - we make shirts. Last year we made subtle shirts that included a book quote. This year we had a group of 4 people. Each person sported a sweatshirt that displayed each of the months Bella was in a zombie-like phase - October, November, December, January (me). I go into detail about this, because the movie actually paid homage to the months in the movie, all except January that is...

Phipps: I'm a fan of the books. I think the character Edward Cullen is generally the teenybopper version of Mr. Darcy...with really sharp teeth. I'm generally a Team Edward girl, although, like Bella, I always seem to forget how much I like Jacob Black...until he is before my eyes. I was "December" in the months that Goolsby describes. I enjoy the storyline...and I'll make a shirt...but I don't write fan fiction. I'm super stoked about the next movie...but I'm not going to stalk the set in Canada.

Audience: Teenyboppers and up

Goolsby: I think a large range of people can appreciate this film. We all know that the Twilight craze affects most women regardless of age. A mom and a daughter bonding over how amazing Edward is? It happens. But I think this movie also has a more sound appeal for males as well. Twilight had minimal action compared to New Moon, and I think boys will appreciate the master-crafted werewolves too. I don't think the movie is appropriate for children though. Definitely teen and up.
Phipps: Bottom line - know your kid. If you've got a kid that handles Narnia, Terminator, Star Wars, etc, without blinking or getting freaked out, it might be okay. But odds are, 14+.

Storyline and drama: "I leave you alone for one minute, and the wolves descend."

Goolsby: Girl meets boy, boy leaves, girl cries, girl makes a friend, friend turns into werewolf, boy comes back. I think we all knew the premise of this movie based on the trailers that were going around like flies. It is simple. I also think it plays off of a dilemma most people can relate to, especially teens and young adults - lost love. If you cant relate to Bella, then you definitely can relate to Jacob. Stake in the heart, or silver bullet I should say.
Phipps: Stuck to the novel, which impressed me. There were a few plot deviations, but in each case, you understand why it needed to be tweaked - it was nothing significant. The telling was seamless.
This movie marks the rise of Jacob Black...in all his wolfy glory. And, of course, the cementing of the "love triangle."

Goolsby: I think a lot of fans that have read the books really appreciated all the small details that were included in this film. Everything was incorporated seamlessly that there were very few times that stuck out as plot deviations.

I also thought that the look and feel of the film was superb compared to Twilight. I liked how they handled the fight scenes between the vampires. The werewolves came out great too. They were big and detailed that I was completed satisfied. The color in the film was handled well too I thought. This film is all about losing the love of your life, and I think the muted colors really helped even though it was subtle. The soundtrack too was well incorporated and subtle. This movie all about about giving us what we wanted with a smooth coating. No grievances from me here.

Phipps: You can tell that Weitz really worked hard on this film. He wanted to please fans and tell a great story. Kristen Stewart once commented that everything that Catherine Hardwicke shot on Twilight was "fast." I think Chris Weitz slowed it down, which was possible due to increased funding, but that allowed the cast and crew to really nail it. The product was a fairly stellar film.
I liked that New Moon isn't so starkly different from Twilight in look and feel, and yet it does have its own flavor. There was definitely more polish to this one and less of a choppy splice-n-dice.
Delivery: Great

Goolsby: I think everyone has been getting increasingly better. Stewart had high expectations from me, just because she failed pretty much in the last movie. She was able to cut down on her blinking which I was so happy for. The really kicker was Lautner, he did an awesome Jacob Black. That boy has got some acting chops for sure. And oi... break my heart and stomp on it, Pattinson's scene with Stewart in the woods was perfect. Pattz was pretty awesome. Loved the supporting cast too. Always have to give props to Billy Burke. Everyone is really falling into their roles, I love it. I cant wait to see what is next.

Phipps: People slipped right back into their roles. The new cast members were well-cast (as was the original cast in Twilight). I think in this case, better performances are rooted in the change of director. Some of the younger cast is really cutting their teeth on these movies - Taylor Lautner and Dakota Fanning being ones to watch. And I swear, Michael Sheen is a vampire geek at heart, since he tends to find vampire/werewolf roles. I'm happy to note that Kristen Stewart definitely improved in portraying Bella Swan - thank goodness. All in all, I was very satisfied with all the performances. And thank goodness, our audience, which was full of loud teenyboppers, was so entranced with the movie that they forgot to be obnoxious.

Phipps overall: 5
Stellar. Everything I wanted.
Goolsby overall: 4.75
Simply for the missing January!

Goolphipp award: 4.8 (No Peanuts Chucked)
Contact us at goolphipp@gmail.com.
Posted by Goolsby / Phipps at 11:02 AM No comments: 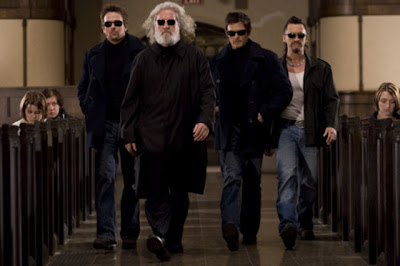 Phipps:
All hail the return of the Saints! They are definitely older. The movie started off in the wilds of Ireland with insanely fake beards. Needless to say, it was a really rocky start. It took a good chunk of the movie to get back into the swing of things. Once you were in the groove, there were tons of jokes referencing the first movie, which were hilarious. It seemed like the movie had just embraced the campiness we all know and love. Believe it or not, Rocco returns to the story, and it was done well. Replacing Rocco, is a spry Mexican kid called Romeo, who actually has more of a brain than our Funny Man. Our favorite trio of detectives were back, enjoying a bigger role. Willem Dafoe’s place was, as lead FBI investigator, replaced by Julie Benz. Plot was a little unexpected, the Saints’ Dad being at the center. Like I said, it was rocky at times. However, the last ten minutes of the movie must be seen by every Boondock Saints fan. In the words of another reviewer, Writer/Director Troy Duffy “pulled a rabbit out of a hat.” I agree. My jaw dropped, hit the floor, and stayed there. I was flabbergasted in the best way possible. Go check out the best kept secret on film.

Goolsby:
I was excited for this movie, very. Phipps is right, it had a rocky start, but panned out in the end. The last ten minutes definitely going the extra mile. I think the second half of the movie was well done though. It paid homage to the greatness of the first one, but also brought a unique story too. However, I don't think the plot packed enough umph for me. I wanted to be completely blown out of the water, and I wasnt.

When you have such stellar performances from all the characters in the first one, its hard not to feel like each part is being replaced. The new Rocco is obvious and the new Dafoe was even more obvious. That was a bit disappointing. It's almost like making your grandma's famous cookies, just because the recipe works so well, doesn't mean that you cant tweak it. This movie delivered what I was expecting, but I still wanted a crunch.

There are a few scenes that just made my heart smile, so cleverly done. The old bartender with tourettes is one of my favorites. I want to say more, but can't! Go see it!

Goolsby overall: 4
For the old man and black cat cameo!

Contact us at goolphipp@gmail.com.
Posted by Goolsby / Phipps at 1:41 PM No comments: 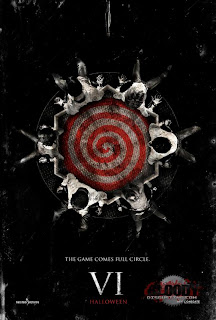 Phipps:
I didn’t have to check my house for Jigsaw when I came home. Standard Saw tradition. That says it all really. It was disappointing. After the train wreck called Saw V, I hoped VI would redeem the franchise. No such luck. No twists. It was predictable…the boo moments were lame. The Saw masterminds had an amazing opportunity to make Jigsaw’s old lady cool, but they didn’t take it. I hate to break it to you, Detective Hoffman ain’t Jigsaw.

Phipps overall: 1.5
Puh-leez. I didn’t even check my house.

Goolsby:
Well, we have been a bit lazy to post, but now that we have, to be honest, I can only remember a few things about this movie. Which is sad. Saw movies have consistently disappointed me. I think viewers have been chasing that twist that blew our minds in the first movie. You would think they could figure out how to give us some type of "woah" moment, but they cant. I remember a pretty gruesome death scene involving acid being pumped into someone's body. Other than that, I think I have already tried to block everything out.

Goolsby overall: 1
Lame.
Contact us at goolphipp@gmail.com.
Posted by Goolsby / Phipps at 11:51 AM No comments: