Transformers: Revenge of the Fallen

Goolsby:
Sigh. Where to begin? All I can do it shake my head back and forth. Why did they have to go and ruin this with multiple inappropriate and ill-fitting sexual quips? This movie had potential to be awesome, and it did not rise to the occasion. Why did the two “ghett0-bots” have to so ghetto?! Robots with gold-capped teeth?! And what in the world was gained by having that anatomically correct Decepticon?! Wrecking balls?! Nothing!

Shia LeBeouf and the other actors did great; too bad their acting wasn’t the main focus. I had no qualms about the storyline of this movie or anything. The transformer movies are all about the graphics. We want to see things transform, we want to see cool stuff, but unfortunately we got subjected to crap. Compared to the first one, I thought the effects weren’t that great. I felt the movements went too fast, and the intricate detail was blurred.

Phipps:
The second Transformers has adopted the typical sequel regret: the shrug and the comment, “it wasn’t as good as the first.” The director made some major blunders by allowing the “anatomically correct” wrecking balls and ghetto-bots to make it into the final cut. I’m sorry, but those ghetto-bots get the prize for the most racist objects/characters/mean stereotypes on screen in recent history.

There were also weird unexplainable things. I was wondering how Shia gets so dang beat up and bloody, and yet Megan keeps white pants clean in the high desert with endless explosions around her. A Decepticon that passes as a human girl? Puh-lease. I missed Optimus for much of the movie, too. Just a few of the little mole hills that amounted to the “fallen” mountain.

The action wasn’t that spectacular either! This movie better not break any records, the word-of-mouth is out.

And so, I’d wait for DVD. The first one was better in every way, so save your money.

A Note from Us

We’re going to be posting in a new format so we can update more frequently. For the big box office hits we’ll use our lengthier format.

Yours sincerely,
Goolphipp
Posted by Goolsby / Phipps at 11:37 PM No comments:

Goolsby: It’s a bachelor party set in Vegas, so nudity, drinking, drugs, gambling, and more is guaranteed. I think is more of a guy movie, but I loved it and I’m a girl.

Phipps: No one under 17. Parents, I don’t want to see your 12-year-old son in this movie! It’s not appropriate. For adults in the world, it was unexpectedly funny…and it wasn’t as raunchy as I thought it would be. In fact, the worse nudity/drinking/gambling (the general crazy Vegas behavior that offends) is featured as the credits roll, and you see images of what really happened the night before. Watch out for that if you’re a bit more conservative.

Phipps: Inventive storyline, I thought. Simple, fresh, and totally ripe for hilarious happenings! Brings together all the strangeness of people getting a little too tossed in Vegas. This is one instance where you have to dredge up what happened in Vegas!

Phipps: The guy with the missing tooth, played by Ed Helms, stole my heart. It was reported that Ed Helms is actually missing a tooth, and had the fake, implant tooth removed for the filming. Yes, yes…it was really gone. Warms my heart. There was a good variety of humor over all, which surprised me. I expected it to be on the crass side the entire time, and was pleased that there was plenty of physical comedy and witty one-liners to balance.

Goolsby: I could not stop laughing the whole time. If it wasn’t one thing it was another. The character Alan, played by Zach Galifianakis, was ridiculously random. Alan is the weird brother in-law that sports a wolf print t-shirt and a man purse. Love it. There was plenty of physical comedy, as well as dry humor too. All the way to the end, including the credits, I was smirking or laughing about something. The story about the missing tooth is pure classic. And who steals a lion?!

Goolsby: The character of Phil played by Bradley Cooper, is point on. He’s the arrogant jerk you just have to like. Not to mention he’s a looker, who looks cherry-up in a suit. Everyone did a really good job. They delivered their lines convincingly throughout. Everyone kept to their character personalities. I hope, hope, hope that there is a blooper reel on the DVD.

Phipps: Funny men committing to off-the-wall characters! I know this was a stretch for Bradley Cooper, who always pulls off the “jerk” role, but it was nice to see that he has some comedic timing too! Mr. Zach Galifianakis stole the show, hands down. It was a breakout performance for him.

Phipps overall: 4
Solid 4. I’m not partial to the comedies, especially those on the crass side, but this movie did win me over.

Goolsby overall: 4.75
As far as adult humor goes, this is up there with the best of em’. It will definitely be added to my collection when it comes out on DVD.

Contact us at goolphipp@gmail.com.
Posted by Goolsby / Phipps at 11:28 PM No comments:

My Life in Ruins 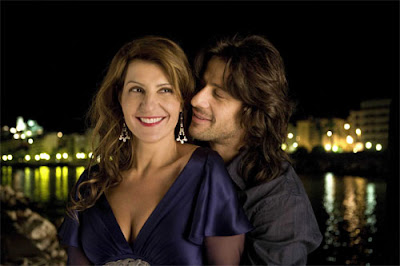 Audience: Post-college chick flick crowd+
Although this does star Nia Vardalos and is based around the Greek culture, it is not My Big Fat Greek Wedding – so don’t treat it like it is. Take My Life in Ruins as what it is.

Goolsby: We went to a showing around dinner time, and were surrounding by people twice our senior – people who could be our parents and grandparents. I’m not sure why this happened, as the movie seems more directed at the 25-35 year old range. It’s a wholesome movie, with sex, so no lame teenagers.

Phipps: I agree with Goolsby, most teens will probably say, “huh?” But, in general, your average female will appreciate the movie - every girl wants to feel sexy and be in love. Guys will be kind of bored, so you might want to plan a girl’s night out around this one!

Phipps: While this movie might seem slow to some, I appreciated the subtlety. Life is mostly subtle, is it not? Poupi and Georgia develop into a couple, they don’t meet-and-fall-into-the-sack. I liked the different side characters – tossing all these stereotypes together creates appropriate drama. All the characters were crazy, but lovable.

Goolsby: The drama is in the slow unveil of the love interest Poupi Kakas, played by the Greek stud Alexis Georgoulis. From bearded mountain man to GQ model in a suit, he pulls it off flawlessly. What better way to find your kefi? Swoon.

Phipps: Pretty basic, but it’s fun. I’ve been on tours before, and you don’t necessarily get to know people as much as the film portrays…but then again, my family didn’t have to deal with a bus crash, a competing tour guide, a hospital visit, and haggling!

Goolsby: While Georgia, played by Nia Vardalos, takes a group of tourist around Greece, you not only get to see her character unfold, but the tourist as well. Irv, played by Richard Dreyfuss, was a treat. Each of the tourists had their own story to tell and it contrasted well next to Georgia’s.

Goolsby: I didn’t go into this movie expecting the world, so I wasn’t disappointed. It’s not a deep movie, so there wasn’t that much to be impressed by. It had a good mix of humor and drama, and everyone did well.

Phipps: I’m satisfied with the movie. Georgia walking for miles on uneven streets in heels kind of bothered me – totally unrealistic! But overall, I have no complaints. Alexis Georgoulis was sweet…and ridiculously masculine at the same time – some men should take lessons!

Phipps overall: 3.5
Solid 3. It was fun. I left without being depressed. I left thinking it was worth spending the ten bucks…and that’s saying something in this economy. Oh, and you can watch it with your grandma.

Goolsby overall: 3.75
My Life in Ruins just didn’t have that pizzazz that I was hoping for. It was a nice afternoon treat none the less.