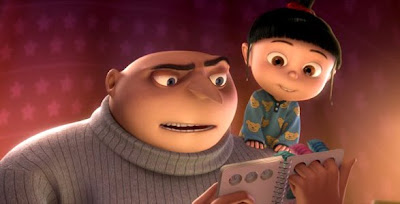 Goolphipp Award: 2.8 (Wait for DVD)
Goolsby:
I was really excited for this movie, and granted, I did laugh excessively, looking back I want more. Mister Steve Carell has been very busy lately. I don't think parts of this movie were rushed, but it just didn't have that umph that I was looking for. Plot - bad turns out to be good. Nothing really shocked me. I got what I was expecting, but nothing above and beyond. One thing to note is that Jason Segel (well known for his role as Marshall on How I Met Your Mother) is an amazing voice for animation! I can't wait to see him give his voice in another animated film. I liked the yellow-blob minions, I wonder what's the difference between the ones with two eyes and the ones with one eye. We did not see this in 3-D, and it didn't really look like this movie would even warrant a 3-D option. Seems like they make anything 3-D anymore... On a random note, I loved Vector's lair with the shark swimming underneath the floor.
Goolsby overall: 3
Nuff said.
Phipps:
Despicable Me ain't a Pixar film. And it shows. There's the usual lack of pizazz present. However, it was entertaining at times. I don't need to see it again, but I did like the little minions and the theme of adoption. I loved the rocket beds on the wall...like machine-operated bunk beds. There was also attention to detail that was quite impressive. Each minion had his own name and was in some way different from the rest - different hair, one eye, etc. Steve Carell actually does a decent job as an animated voice, as does the rest of the cast - even Russell Brand. The X factor was missing. I don't know what that is...but Pixar sure does. There was a lot of physical comedy, so kids will laugh at that, but some of the dry humor was probably a little over their heads. It was a standard animated movie, but nothing to write home about.
Phipps overall: 2.75
Fun, but I'd just Netflix it.