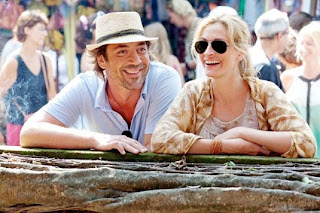 Goolsby:
I have not read the book. I was actually a little afraid to see this movie because I thought it would make my Gypsy-foot ache. I've got a horrible traveling bug. I had a great time at this movie. We have a friend who just got back from Italy, and it was great to imagine her there in the movie.

This movie is about one woman's search to find herself. Liz Gilbert, played by Julia Roberts, travels to 3 destinations in the course of one year. I'm not sure how long she stays in each place, but I would think it is about 4 months in each place. I am curious to know how much a trip like that would cost. We get to see bits of Italy, India, and Bali. Each leg of her trip teaches her something new. She learns how to eat, pray, and love. More importantly she learns the importance of each of those aspects in her life.

The performances were great. Javier Bardem plays Felipe, a divorcee love interest that we get to meet in Bali. The chemistry between Roberts and Bardem was really great. James Franco plays the rebound boyfriend. Franco is such a strange guy, he always brings an element of surprise.

There is this moment in the film when Liz is in the process of finalizing her divorce. Her husband, played by Billy Crudup, represents himself and they have a pretty heated argument. I really found this moment gut wrenching. So props to the actors in that scene. This movie also had great funny moments. Goolphipp was by far the loudest people in the theater laughing. There is a minor character named Luca Spaghetti, played by Giuseppe Gandini. I absolutely loved this guy, for no real apparent reason. Haha.

Goolsby overall: 3.75
A great movie, but missed that extra umph.

Phipps:
Lemme just start by owning a meltdown I had after I saw this movie. I blame Bali - the "love" portion of Liz's year abroad - and Javier Bardem's character, Felipe (and Bardem for portraying him). Kid is fascinating, and this grown woman is crushing on him. Anyway, as far as other notable performances, I thought Richard Jenkins, who played "Richard from Texas," delivered something special. He's had a good year of performances between this movie and Dear John. I wasn't blown away with Julia Roberts, but she did the job. In fact, I think I liked the supporting cast best - full of fun moments.
This movie invites you to "meditate" about your life. Decide what's important. I appreciated it. One of the best moments was the "alternate" birthday present idea. Liz decided that all her friends should donate the money they would have spent on her birthday to a good cause. I liked that. I couldn't help but think, what would the world be like if we all functioned like that?
Aside from those thinking moments, like Goolsby, I couldn't help but wonder how the woman funded a year abroad. From what was portrayed in the movie, it appeared that she didn't budget or worry about money the entire time. I'd like to get my hands on the financial plan and maybe copy it someday... and substitute the places. Because I know eating in Italy is expensive.
You know, it occurs to me now that all the technical stuff was top-notch. Everything was cohesive and seamless. Props to the people behind the scenes.
Overall, this movie is a solid choice for a ladies night. I'm actually not sure what guys would think of it. The whole movie might be a little too sappy for them. Let us know, guys, if you agree/disagree. I think this movie deserves a watch. You'll be entertained.
Phipps overall: 4
Solid, Darling.