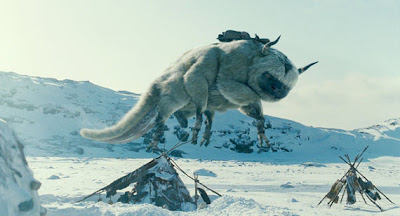 Goolsby:
Once again, we know nothing about the roots of this movie. This movie is based off the animated series Avatar: The Last Airbender. For someone who knew nothing of the cartoon, I was pleased with this movie, but not impressed. I thought the CG was lacking in most cases. The actual "bending" of the elements was done well, but everything else got forgotten. The acting, sub-par. I was excited to see Dev Patel because I have been a fan of his since his start on the BBC series Skins. Patel got to play the jaded Prince Zuko, and I thought it was a good practice role for him. He got to try out something new. I wanted more out of the actors, but accepted everyone about half way through the film. I loved the magical world created. My favorite things in the movie were the animals. The above pictured Appa, a Sky Bison, is one of the coolest creatures I've seen. It is up there with Falkor from The Never Ending Story and Ludo from The Labyrinth. I also loved this flying lemur thing.
Goolsby overall: 2.5
A movie with potential, but didn't quite make it. I didn't think it was horrible, just not fantastic.
Phipps:
I hate when people make a movie with the intention of making at least 2 more, but then the movie doesn't do well in the box office, and you never get to see the rest (ie, Eragon and Airbender). The reviews from the normal people were really mixed on this one, so Goolsby and I put off seeing it. People who were fans of the original show either hated it or walked out. People that knew nothing thought it was decent. I fall into the latter category. The plot line was interesting. Mostly due to the fact that the movie takes us into a different world, which is always fun. Goolsby is right, though, the CGI is sub par outside of the element bending. I could read into the spiritual symbolism throughout the movie, but I don't necessarily want to get my back up about it. Overall, I thought it was an interesting movie...which...given my love of fantasy, I can foresee myself pulling this movie out of a $5 dollar bin and buying it in the future. I would say this is a good Netflix or redbox rental: action-packed, clean on the language end, your kids will love it, and you won't be bored.
Phipps overall: 2.75
A few hours of entertainment via Netflix or redbox.